Millions of people from the different corners of the world use twitch every day. So the company wants this platform to be safe & suitable for all people, irrespective of who they are.

To ensure this, twitch has banned certain words & types of language that you can use.

If you use them, they can get you banned from the platform. So you should refrain from using such language in video streams and chats.

Let’s find out what these words are & how you can stay safe.

Twitch has always been very stringent with its rules & regulations related to the banned words. Any offensive speech by the streamer or any promotion of such speech is also dealt with strictly. Twitch considers either chats or videos using such language harassment.

On twitch, harassment includes a deliberate attempt to threaten someone based on:

If you use such harassing words, you are liable for the ban on twitch. The duration of the ban will depend on the severity of your offense.

Banned words on twitch that you shouldn’t say

Twitch is a platform people from a vast background use daily, so there are many things you should not say on twitch. You do not know who is watching you or reading your comments & can feel hurt.

Twitch is designed for entertainment purposes & must be used as such. You should avoid inflammatory statements, threats to harm someone or even yourself, sharing someone’s personal information, or anything that can hurt your viewers mentally.

As we all know twitch has banned three specific words globally. You cannot use them anywhere on Twitch. Use it once & you stand at the risk of getting yourself banned permanently. Here is the list of the three words banned under twitch TOS & Community guidelines: 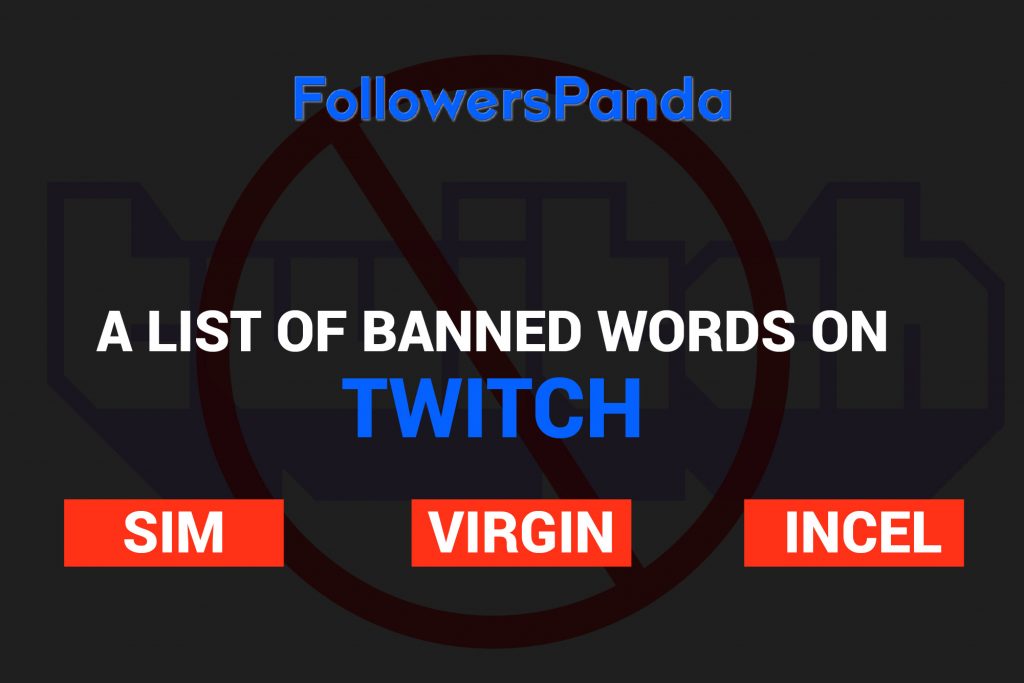 When it comes to twitch, these words are a “NO, NO.” But that’s not all. There are certain other terms too that you should avoid. Using any of them will have very severe consequences.

E.g., twitch doesn’t allow any of its members to harass or intimidate anyone through words. You cannot say words like “Kill Yourself,” “I will kill you,” or “I hope you suffer from (any bad fate).” “suicide” is another word that can get you in trouble on twitch.

Here’s a quick guide by Stream Scheme on the topics & words you should avoid on twitch:

Say no to Doxing

Apart from banned words on twitch, there is one more area where twitch does not tolerate incompetence on the end of any twitch user. It’s about the private or personal information of other users.

E.g., if you are a streamer & have some personal information about any other streamer, like their address or phone number, you cannot leak it on twitch. There is a valid reason for such a staunch stand. Leaking someone’s information online can put that person at severe risk.

There are a lot of deranged fans & people with bad intent who want to hurt twitch streamers in some way. Leaking their personal information can be very risky. Specifically, you cannot share details like a person’s phone number, address, personal social media account, or any other private information.

Twitch is a place to enjoy the gaming & online community. So make sure you avoid using the banned words on twitch, do not attempt to harass any creator or the viewer & have the best experience.

We hope you have found the answer. Stay tuned for more information related to twitch here.

Twitch is a platform that a lot of people use. So using banned words can hurt their sentiments. So it’s better not to use these words.